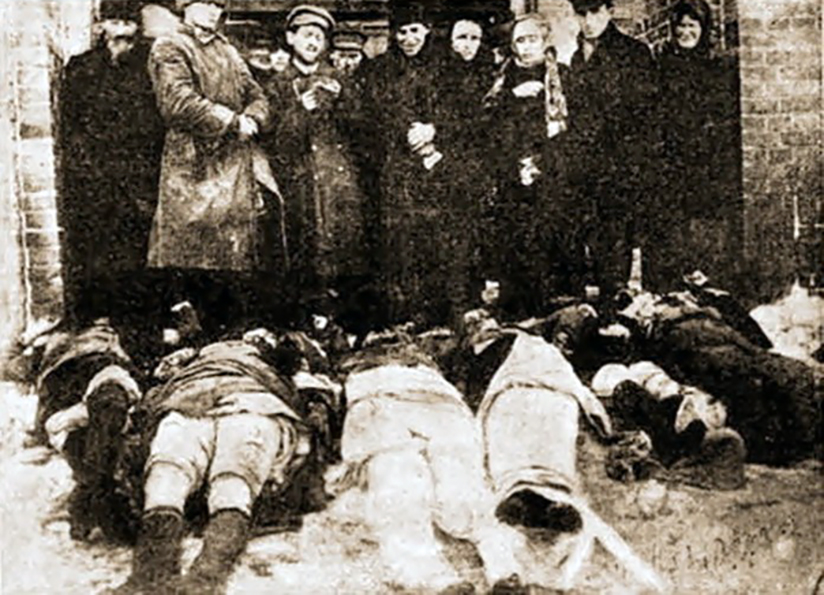 On February 15, 1919, one of the bloodiest Jewish pogroms during the Civil War took place in Proskurov (now Khmelnytsky). It was carried out by part of the Ukrainian People Republic army, which accused  Jews of organizing a Bolshevik uprising.

In the town of Proskurov in the Podillia province, half of the population at the beginning of 1919 were Jews [i]. From the beginning of February the city was under the rule of the Directory of the Ukrainian People Republic.

Ten days before the pogrom, the Zaporizhzhia Cossack Brigade named after Symon Petliura appeared in the city under the command of Ataman Ivan Semesenko. The 3rd Haydamatsky Regiment arrived in Proskurov together with this brigade.

On the morning of February 14, a couple gunshots broke out anti-government uprising. First of all, the Bolsheviks and their supporters seized the post office and the telegraph, and arrested the commandant of the city of Kiverchuk. They involved soldiers of the 15th Belgorod and 8th Podolsk regiments of the Ukrainian People Republic in the uprising. Bolshevik-minded soldiers arrested their officers and marched to the station where the Petliurists were staying. But when they saw the number of soldiers, they retreated to their barracks - so the uprising failed.

The pogrom of February 15, 1919 was made after the victory over the Bolshevik insurgents. Ataman Semesenko held a large banquet [ii], during which the Jewish community of the city was accused of organizing a revolt against the Ukrainian authorities. At the request of the Ataman, the Haidamaks vowed to slaughter all the Jews of the town, but promised not to plunder their property [iii]. It was a Saturday, and the Jews went to the synagogue in the morning to pray, and when they returned home, they sat down to eat. Soldiers scattered through Jewish streets in groups of 5 to 15 people entered homes and began killing Jews, regardless of age or gender.

There were multiple episodes of rescuing Jews by locals.

Cathedral, seeing the killings, could not remain indifferent. He gathered the Jewish children and hid them in the basement of his house. The archdeacon, of course, could not leave the house, but despite the obvious danger, he went to the church, in the courtyard of which frightened Jews gathered. When the thugs tried to break into the church, Father Clement stood in their way. He tried to warn the Haidamaks. However, ferocious bandits knocked him to the ground and stabbed him with bayonets. Still, the priest's death calmed crowd down. People were rescued.

When news of the massacre spread among the Jews, they began hiding in attics and cellars, but bandits pulled them down from the attics and killed them. They threw hand grenades into the cellars. According to witness Schenkman, the city's Jewish self-defense chief, the Petliurists killed his younger brother in the street, then broke into the house and split his mother's skull. Other members of the family hid under the beds, but they could not escape: the youngest brother was stabbed when he kissed the body of the dead mother, the father, who was trying to help the baby, was shot. Schenkman himself only accidentally survived [iv].

The massacre lasted three and a half hours. It would probably have lasted until late at night, but was stopped by order of Front Commander Shapoval. When Ataman Semesenko received the order, he stated that "there will be enough massacres today."

Although there were no more killings, numerous beatings continued over the next three days. About 1,200 people were killed and another 300 died of 600 wounded. Semesenko, referring to the disease, left Proskurov. Subsequently, by order of Symon Petliura, an investigation was conducted into the pogrom in the city. I. Semesenko was arrested, but managed to escape. In 1920 he was arrested and the former ataman was shot by a court-martial of the UPR army. Clement Kachurovsky is buried in the old city cemetery. In Proskurov, on the site of the mass grave of those killed in the pogrom, a memorial was installed (1925). It is decorated with bas-reliefs. One of them bears the names of those who risked their lives to try to save the Jews, the other bas-relief depicts the feat of a priest.